All out for cricket at Hallgarth

For Hallgarth Care Home's latest game of table cricket, the weather was so nice it seemed to be a shame to stay indoors, so residents took a vote and outside they went!

With sun lotion applied and sun hats on, with teams denoted by tiger or leopard bands, the game began.

Josie from Chester-le-Street Cricket Club led the way as main umpire and by the end of the innings it was 105 for 5 for the Tigers and time to stop for some shade and a refreshment break - as well as a team talk about strategy and tactics!

It was then the Leopards turn to take the 'field' and they duly took the honours, scoring 109 for 5. Sheila was the last woman in and scored three sixes in a row before being caught out!

It was a grand afternoon and very competitive - with the rematch highly anticipated! 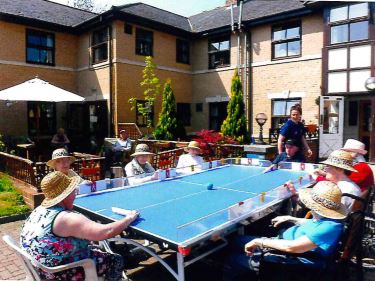