Resident, Frances who’s 84, at Pellon Care Centre remembers the war and here are a few of her memories. “I was 9 when the war finished. I lived in Swansea which was bombed a lot, so much that there was only a church still standing in one part of it. My house was bombed so that the top half was missing, we put tarpaulin on top and live in the bottom half of the house as we were not allowed to move. We also had an air raid shelter in the back garden.

I remember all of the American soldiers they were good looking! They introduced us to sweets and apples, we hadn't seen them before. I remember taking my gas mask to the mechanic to see if there were any holes in it.

When the war ended I remember the parties on the street, the dancing and the singing. My friends and I played out until 2 or 3 in the morning running around and our parents didn't care! After that I got to meet my sister that I didn't know I had, she was 18.”

It’s brilliant to hear VE day stories like this, the relief and excited state that everyone was in when they found out the war was over. It makes the 75th anniversary event even more exciting. 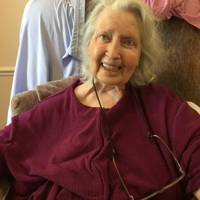