Victory for Jack at Beech House

Unhappy with the service he was receiving from BT, Mr Jack Stead, a resident at Beech House in Barton-upon-humber, took matters into his own hands, with a little help from Home Administrator Jemma Cranidge.

Jack rang his local MP Martin Vickers, who took up the case, and off his own back Jack followed up with a letter explaining the issues he was experiencing.

As a result of this, Jack received a reply from relevant parties at the Houses of Parliament in London who also helped his cause.

After all Jack's efforts the issue has now been resolved and Jack has a new phone line in his room - and reduced payment charges.

Jack is 90 years old and still believes in fairness and said he would fight it again if needed. Well done to Jack on standing his ground and to Jemma for assisting him - great teamwork and a fantastic outcome! 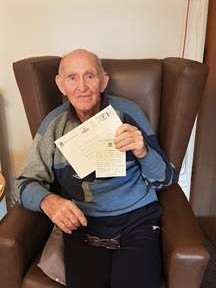