Three residents at Hallgarth Care Home in Durham had set their hearts on making cheese scones, so they went ahead and did just that.

They sent them off to the kitchen for baking, and with the tea made and brewing, residents could smell the scones, and couldn't wait to sample them!

Meanwhile six other bakers had chosen biscuits as their bake for the day, and between them made a selection of 75 shortbread, lemon and sultana cookies. So that was an excuse for another cup of tea, so everyone could try the biscuits too!

The only problem they had was that the recipe was in grams and everyone in the group was thinking in ounces. Olwen and Nancy took charge of the scales and worked it all out, and in some instances found a 'guestimate' and fingers crossed worked just as well! Luckily these experiences bakers did not disappoint, and next on the menu will be tarts and fairy cakes! 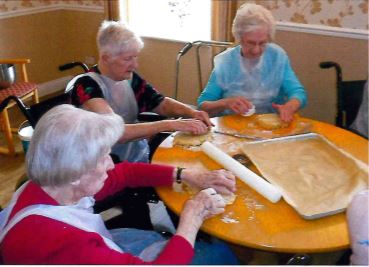