Cambridgeshire carbooters get behind Bill's fundraising for Midfield Lodge

Families of residents of Midfield Lodge in Oakington, near Cambridge, kindly ran a car boot fair to raise money for the home's activity fund. Little did they know that this would be just the start of their fundraising efforts!

The event took place in the local village at the start of August and Bill Cannings and his grandchildren drew a poster weeks before and displayed it at Midfield Lodge asking for donations of bric-a-brac for the sale.

Bill's wife lives at Midfield and he wanted to help the home to raise money to make the inner courtyard garden accessible to residents by opening up the space and creating an amenable area for activities and social gatherings.

Before the actual sale Bill used the home's smaller conservatory as a selling point and raised over £200 by selling to staff and visitors. The donations kept on coming and at the sale itself Bill and other relatives and staff raised a further £200. This effort was already fantastic, but then on the day many fellow car booters donated items to the cause, meaning Bill had more to sell.

A week later, Bill had raised a further £354 with more items being donated daily! The total is still rising and Bill is planning another sale in three weeks time.

Midfield Lodge would like to say a huge thank you to Bill and other relatives for all their hard work - and are looking forward to starting work on the courtyard improvements soon. 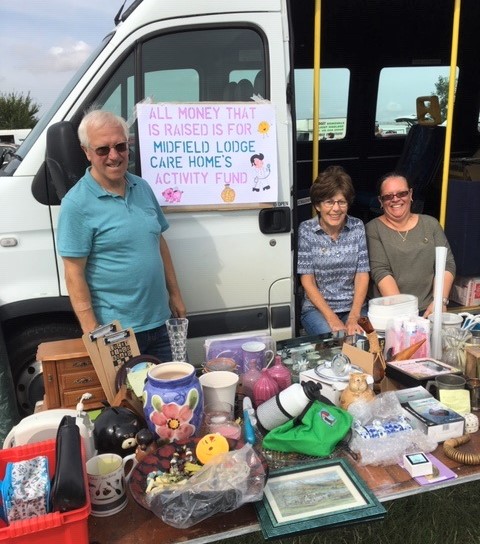